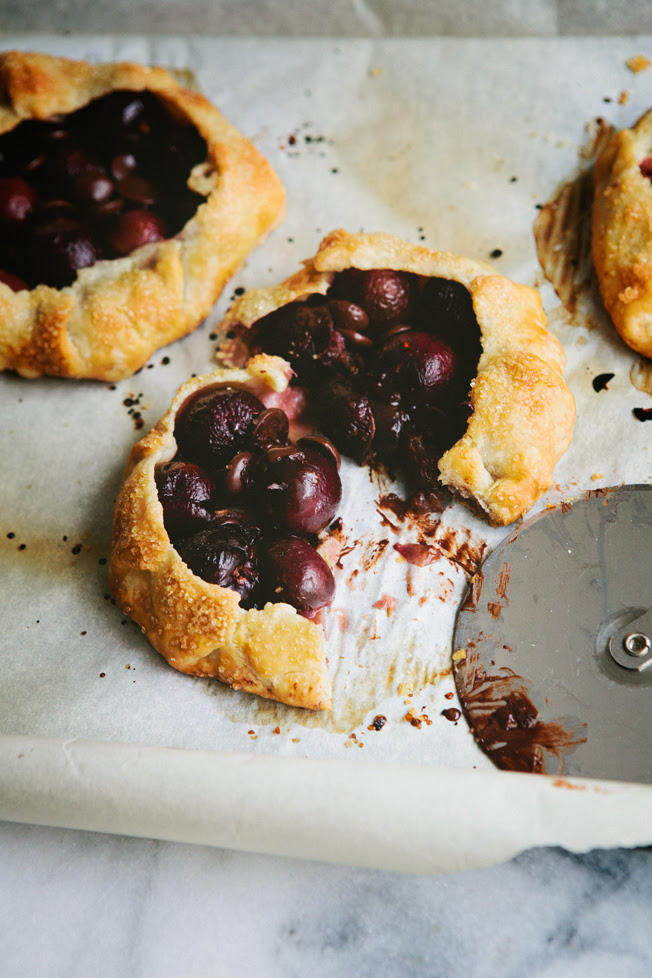 Sour cherries are a lot more common in Russia than sweet cherries. In fact, when I asked my fellow Russian food bloggers for ideas on using sweet cherries in baking, most of them said that they just eat sweet cherries out of hand, fresh, because the season is so short in Russia and they’re expensive. 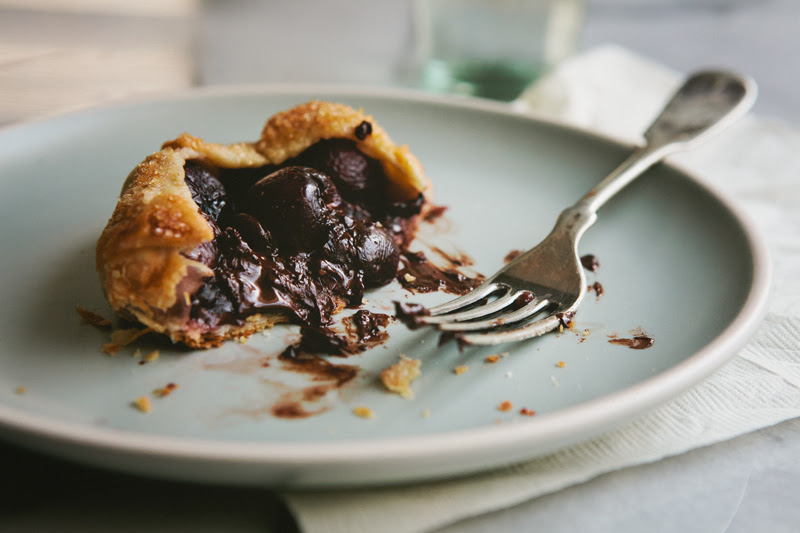 In Texas, the opposite is true: sweet cherries can be found in pretty much any store in the summer, but I am yet to see sour cherries. Fortunately, my blogging buddies have not completely abandoned me and threw some ideas my way. The following recipe is based on an idea offered by Irina, a blogger from Siberia. 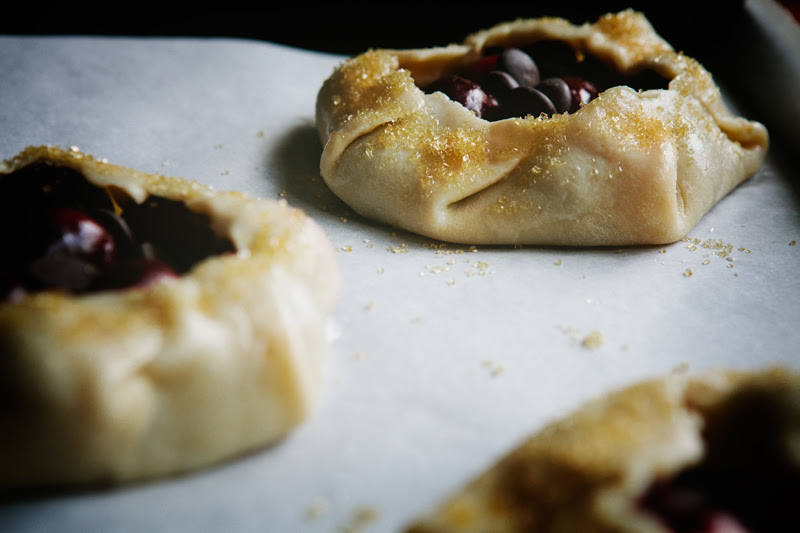 Now, this recipe uses a great American invention: thin pie crust :). What Russians call “pie” is a pastry with a lot of yeast dough (not unlike that used for the cinnamon rolls) and some filling, either sweet or savory. Those are nice, too, and I hope to write about them in the future, but today I want to talk about a recipe that uses traditional American pie dough. 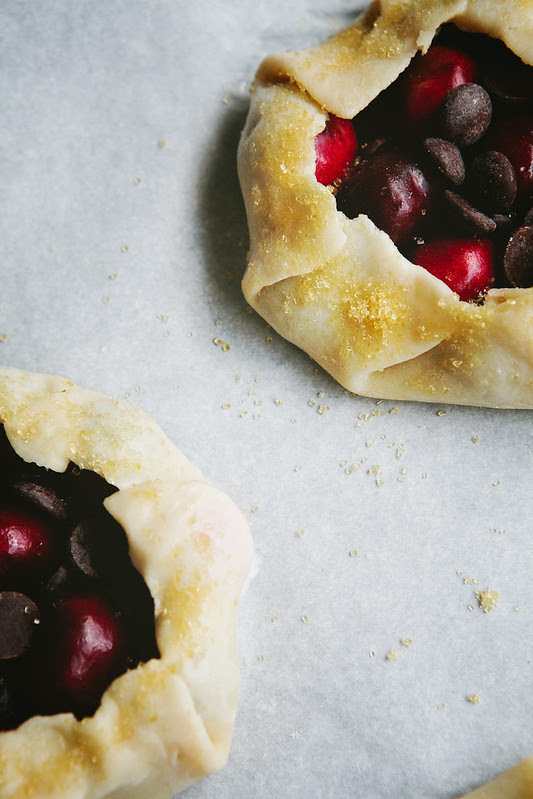 These galettes can be made with store bought pie crust (just shape it into one big galette instead of 4 small ones), but the pie dough is so easy to make at home and is totally worth it, with its buttery, natural flavor. My favorite pie crust recipe comes from Rose Leavy Beranbaum’s book The Pie and Pastry Bible. It has a few more steps than most recipes, but the resulting pie crust is exceptionally flaky and tender, and it works every time. 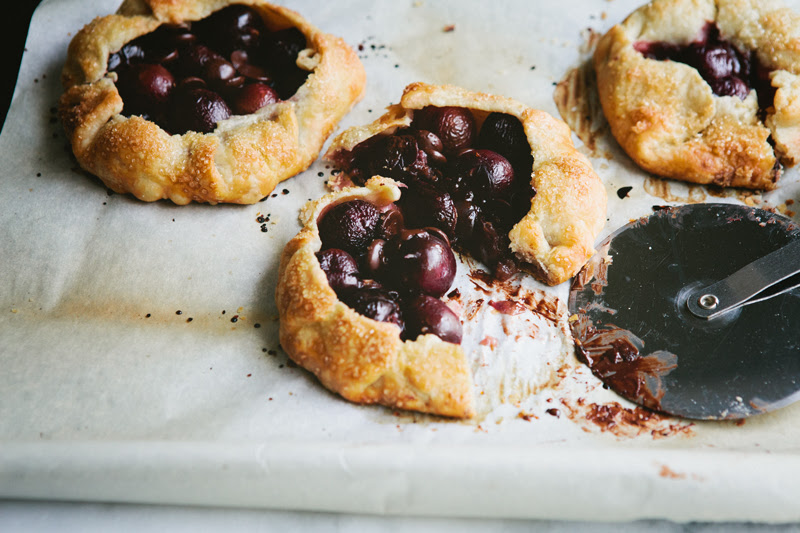 Divide butter into 5 and 3 tablespoons. Cut into 1/2 in cubes. Freeze the smaller portion; refrigerate the rest for half an hour. Put flour, salt and baking powder in a large Ziploc bag and also freeze for half an hour.

Pulse the flour mixture in the processor to mix (do not discard the bag). Add the refrigerated butter and process for about 20 seconds, until crumbly. Add frozen butter and pulse, until pea-size pieces form. Add cream and pulse about 6 times, until dough holds shape if pressed between fingers.

Place the dough in the bag and knead a few times, until it holds shape. Divide into 4 pieces, shape each one into a disk and refrigerate for at least one hour and up to 24 hours.

Roll each disc into circles about 8 inches in diameter. Divide the cherries and chocolate evenly between crusts. Shape into galettes, pinching the sides up and leaving a large opening in the center (see photo). Lightly whisk egg white and milk, brush the tops of the galettes. Sprinkle with raw sugar. Bake for about 25 min, until golden. The galettes taste best when eaten on the same day. 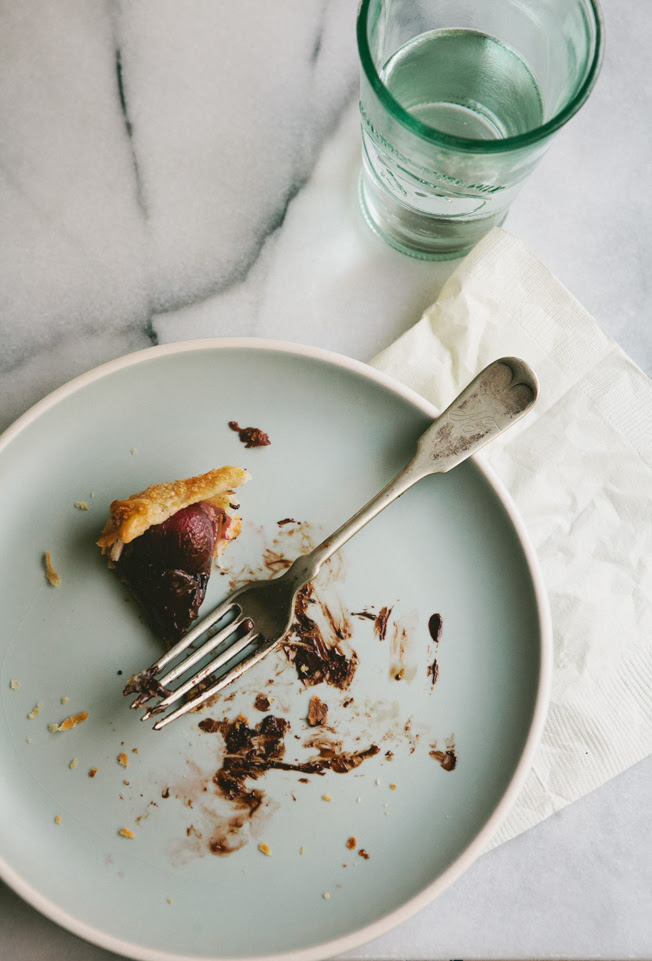