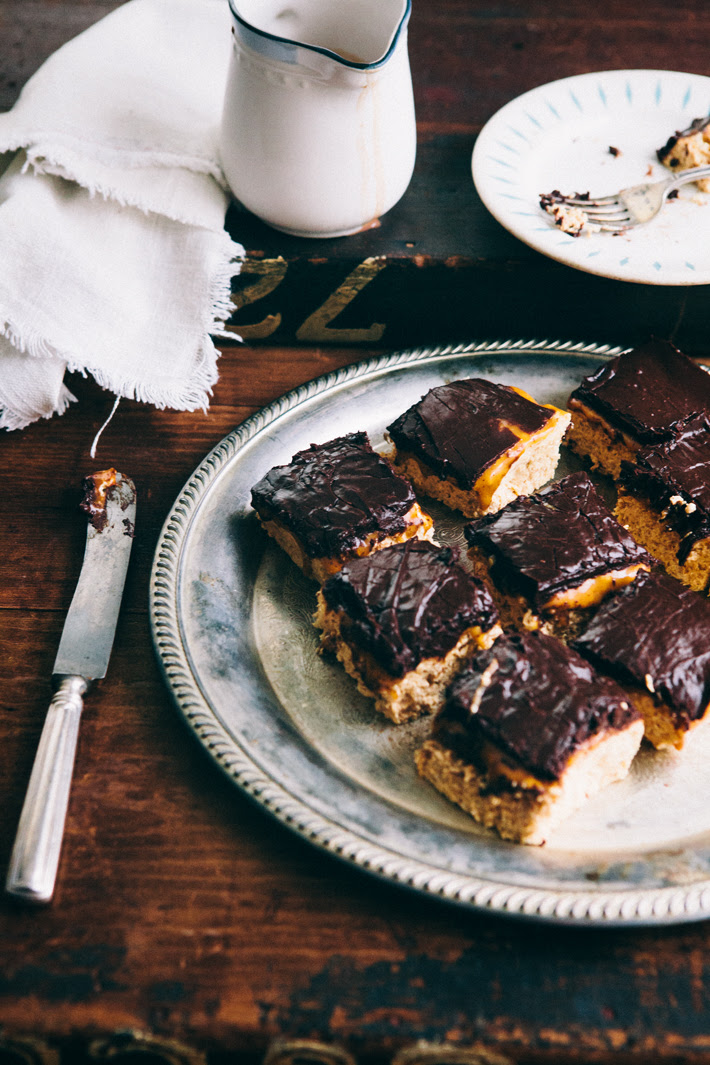 I was flipping through the pretty pictures on Tastespotting when I saw THEM. The Whatchamacallit Bars. Now, I don't know what Whatchamacallit candy bars are. Never heard of them. But I knew right away that those bars looked just wrong, wrong, wrong and that I must eat them. 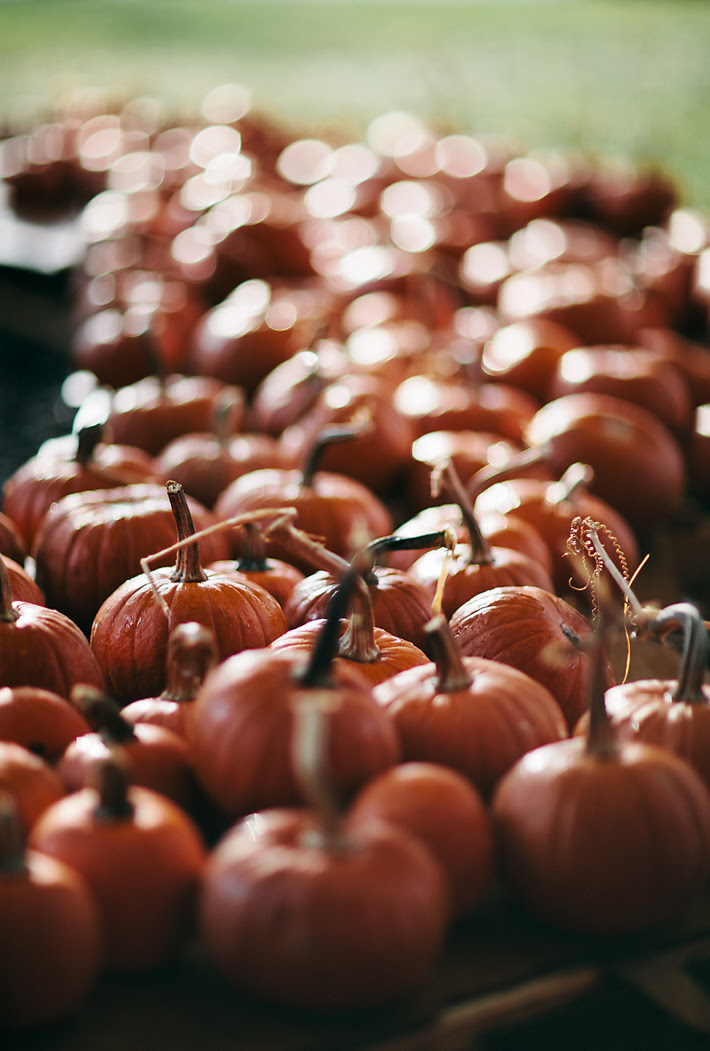 Here in Houston there are no fall colors. Some yellow and red leaves on the trees will only appear in December. Daily temperatures hover around 90 degrees and the only way we know that it is actually fall is PUMPKINS. In stores, at pumpkin patches and in people's front yards. That, and the Halloween decorations. 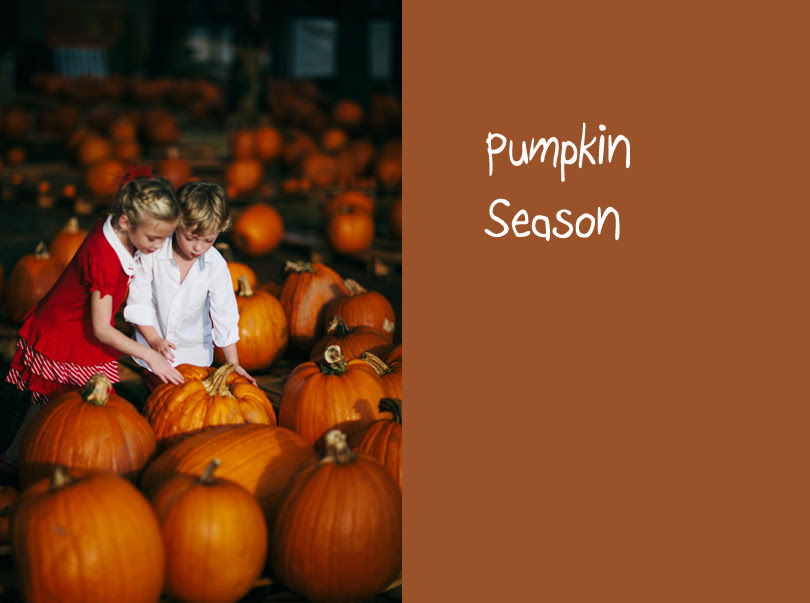 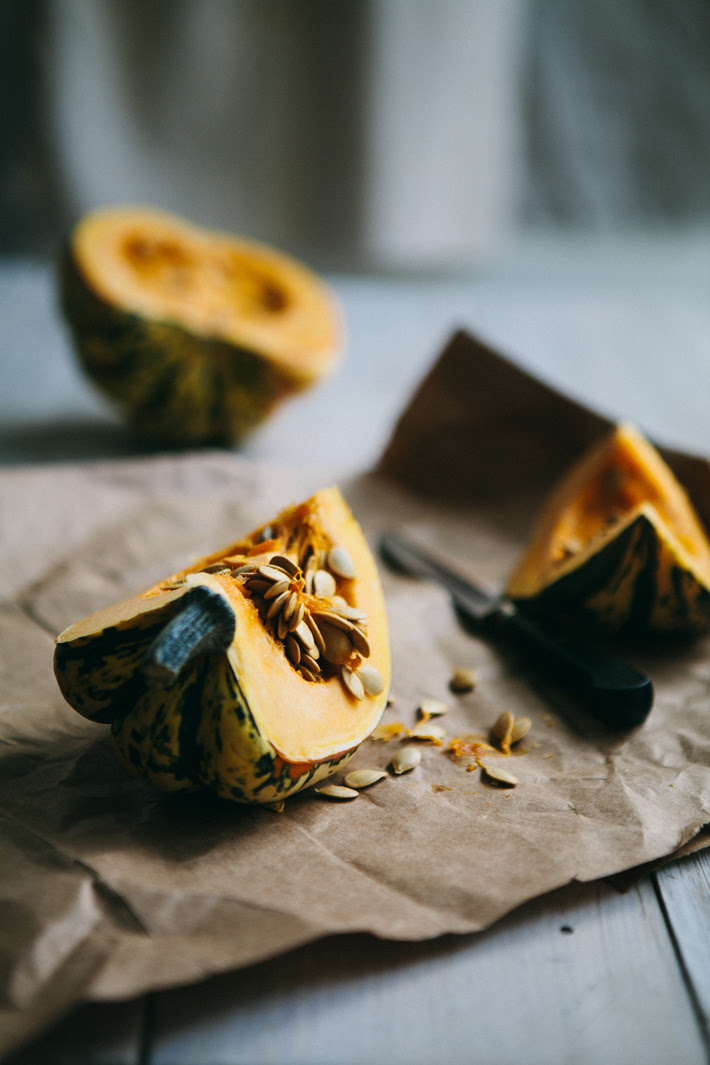 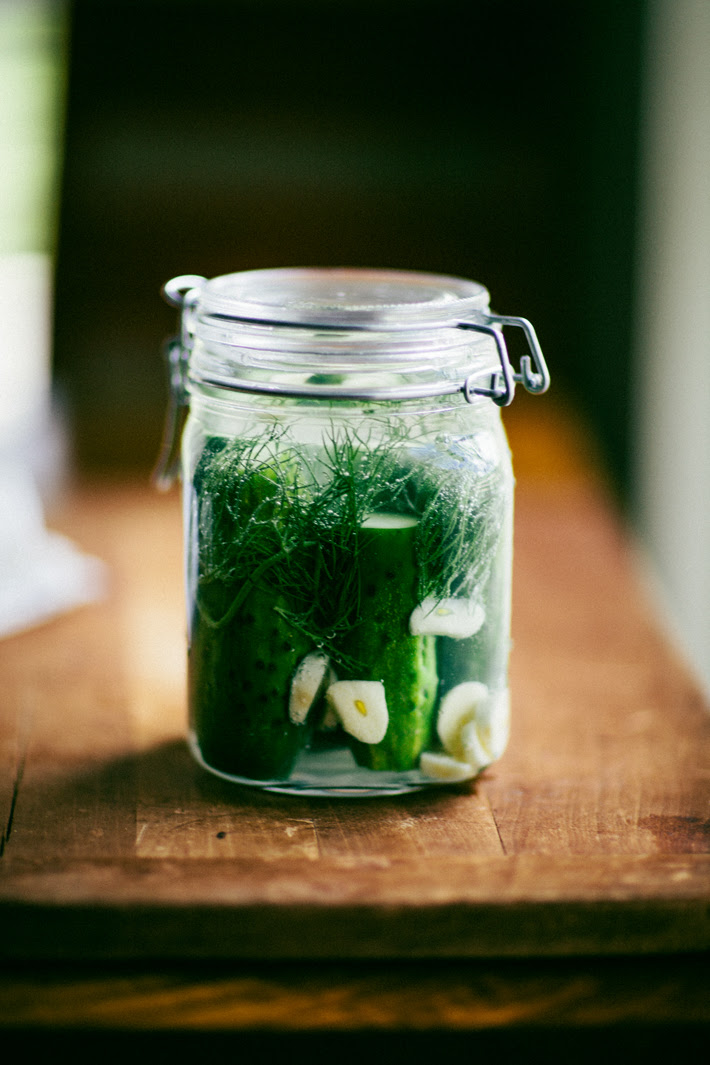 Hey guys. I have a question for you. I know that I get the most response to my posts about baked goodies, such as upside down plum cake, carrot cake or New York style cheesecake. And baking is what I enjoy the most. But I also want to write about modern Russian cuisine, with ingredients and processes that are adapted to the US (and international!) audience. I've written about such basics as borsch, eggplant caviar, okroshka, vinegret and yellow pea soup. So my question is: is there anything specific you would like me to write about? A dish you have tasted, an ingredient you have heard about, perhaps I could answer some general questions about what Russians eat? Let me know; it's a lot more fun to talk about something that I know others are interested in. 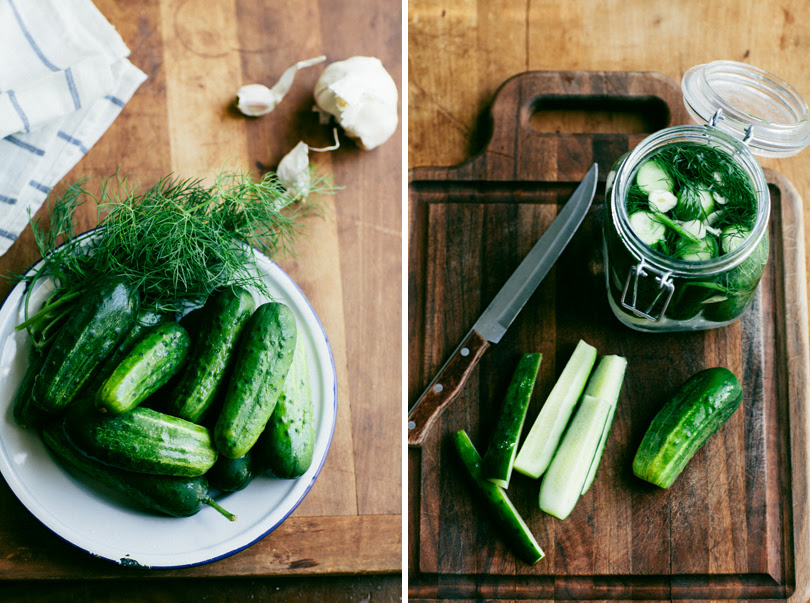 Anyway... I've been struggling with the name for these "pickles." Because strictly speaking, the cucumbers are not pickled: no acid is used in their preparation. They are brined in a salt-water solution for 24 hours, resulting in mildly salty but crunchy "pickles," without the acidic harshness. This is actually a popular way to cure cucumbers in Russia, especially in the summer, when tiny, fuzzy cucumbers are available in open-air markets and people's backyard or "dacha" (summer home) vegetable gardens.

The favorite way to eat them is with "young" (new) potatoes which are boiled in their paper-thin skins and served with generous amounts of butter, dill and, sometimes, sour cream.

This recipe calls for carbonated (sparkling) water whose tiny bubbles make the pickles especially crunchy. I should credit Russian celebrity blogger Nika Belotserkovskaya for the idea. After trying it, my long quest for the malosolnye ogurtsy was over.

A word about the cucumbers: if at all possible, try to use the smallest ones you can find. Those ginormous thick-skinned wax-covered generously-seeded monsters you see in supermarkets will not work. 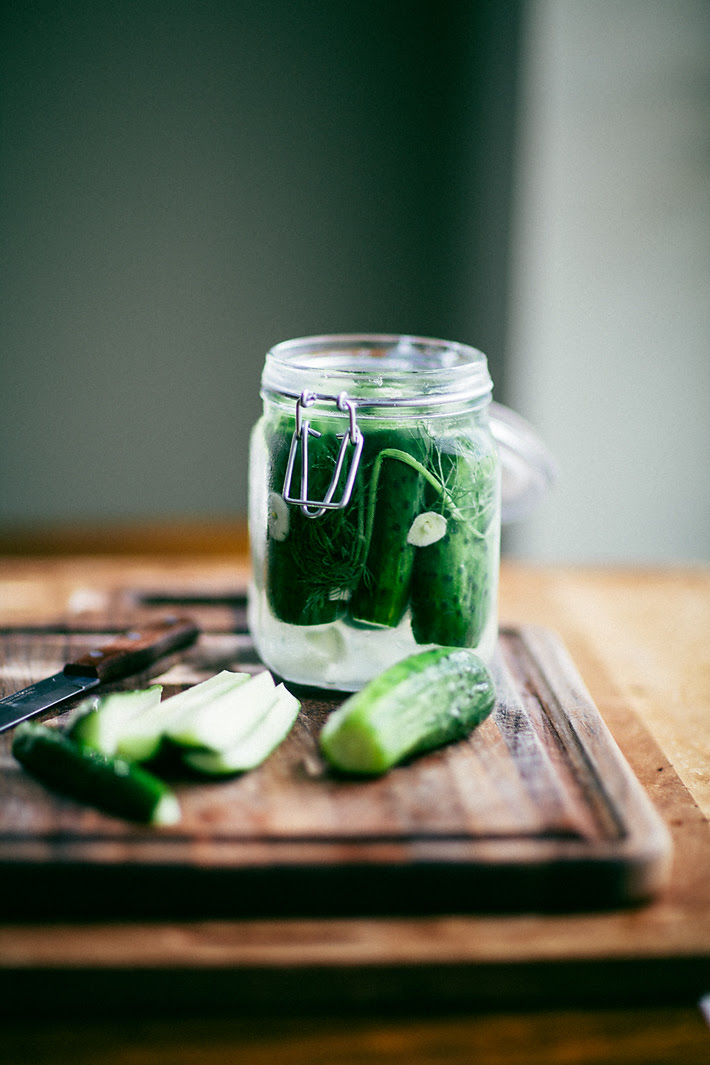 Trim the ends off cucumbers. Layer cucumbers, dill and garlic in a glass container. Dissolve salt in water, pour over the cucumbers to cover them completely. Cover and brine in refrigerator at least 24 hours. 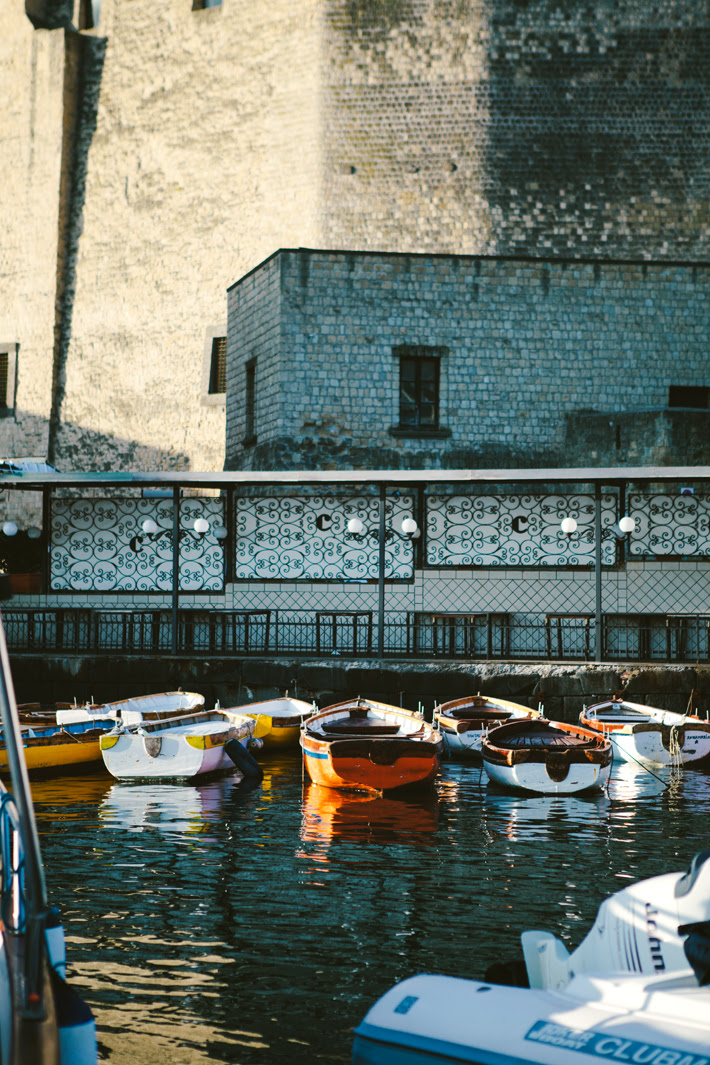 I have been traveling a bit lately. Some for work, some for pleasure. One of the trips I took this month was to Naples and Sorrento in Italy. I had been to Naples before and knew to expect the heart breaking contrast between the beauty of the place and its messiness, with graffiti and crime. On the second visit, though, the less-than-perfect features were not noticeable; what stood out and brought me pleasure was the literally "azure-blue" sea, tiny markets, late-night pizza while watching the passeggiata, all jet-lagged and still feeling like I am outside of my body. The "pinch me, am I really here in Italy right now?" experience. I was fortunate to spend my three days in Naples in the company of an Italian friend. While I can vaguely follow the general direction of the conversation in Italian, I am in no way capable of actually communicating in it. My friend was my interpreter, my explainer of things, my way to take a more intimate peek into the culture.

She is a botanical artist, which means she paints plants with a perfect degree of accuracy. Meandering along the narrow (and slightly claustrophobic) streets of the city we came upon a man who was selling pomegranates right out of a bag. The fruit still had branches with gorgeous leaves attached to it. Honestly, the man did not look like he harvested the pomegranates in his own garden... but that's Naples :). My friend bought a few pomegranates from him because they make a beautiful subject for her art. And we spent the rest of the day - our visit to a museum, our lunch at a little cute restaurant, our shopping - with those branches merrily and oddly sticking out of her purse. How I longed to have a couple of those pomegranate beauties so that I can bring them home and use them for my art, photography, but - everyone knows, there is no bringing food or plants into the US!

So I decided to buy and photograph pomegranate the minute I got home. My blog is focused on food, so of course I would cook something with it. After searching for various ideas I chose pomegranate gelato. Read on for a recipe. 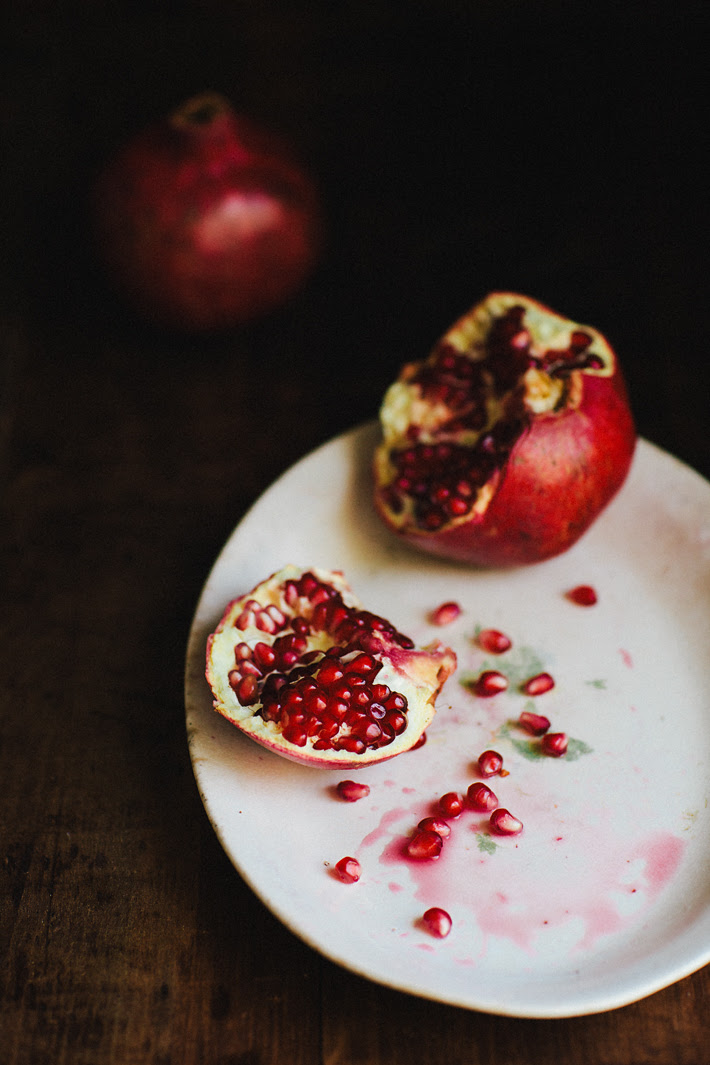